Why are you buying cheap magnification?? 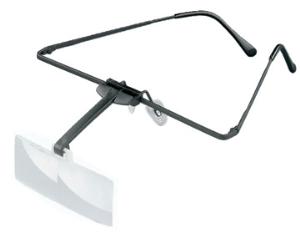 I frequently see posts in the esthetician groups on Facebook asking about magnification, and inevitably someone mentions the CHEAP, MADE IN CHINA crap that you can find a dime a dozen on eBay or Amazon. Don’t get me wrong – I LOVE eBay and Amazon, but not for something as IMPORTANT as my EYES!

Look, I’m an esthetician, and because of that I have GOT to be able to see clearly in the treatment room! Once my eyes go, I can pretty much kiss my lucrative career goodbye! Our business DEPENDS on being able to see, and to SEE WELL! (Yes, lots of capital letters – I’m feeling pretty passionate about this….) 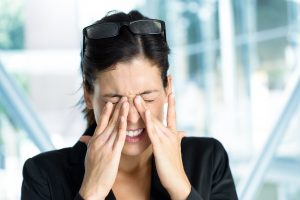 Eyestrain is the kiss of death for an esthetician!

STOP BEING A CHEAPSKATE WITH YOUR MAGNIFICATION! If what you’re using isn’t comfortable, gives you headaches, gives you eyestrain, makes it so you JUST CAN’T FOCUS, then what in the HELL are you doing using it?!?!?!?

When I was a newly licensed esthetician I bought my magnification loupe on Amazon. It was cheap, and it was awful. About a year after owning it, it barely stayed in one place, it creaked HORRIBLY (not extremely relaxing for my client), and would fall toward my client’s face as I was peering through it! One day it broke right before my client was due to arrive! I held it together with duct tape and some string I had in my treatment room. It was awful!

I then tried the bt-vision from Bio Therapeutic. OH MY HELL – I hated this thing. It squeezed my head so much that I had a constant headache when I used it! The band split and would pinch my forehead, and the lines it left on my face. NOT SEXY!!! It also broke within a year of owning it, and like a dummy I BOUGHT ANOTHER ONE JUST LIKE IT! I didn’t know that there was something better out there, and I was paying for the ‘brand’. I should have used my big, giant brain and purchased something else. But, I didn’t, and I suffered through another and luckily it broke not long after I purchased it which was a blessing in disguise!

About this same time I went to train with one of my mentors, and he introduced me to Eschenbach Optik magnification glasses. They were AMAZING! He told me he’d had the same pair for OVER TWENTY YEARS! YES – you read that right. THE SAME PAIR! WHAT!?!?!? You mean there are products in the world that are designed to LAST!?!?!? As soon as I returned home from training with him I of course went on Amazon and found a pair that looked JUST LIKE HIS for less than twenty bucks! Score, right?

HA HA HA – WRONG!!!! They lasted for MAYBE a week, maybe….. I contacted the seller, and told them of the issue (the part where the lenses attached to the glasses broke) and they sent me another pair, which lasted less than a month – same issue.

I finally smartened up and bought the REAL DEAL magnifying glasses from Eschenbach, and I’ve had them for over 2 years and they show absolutely no signs of breaking. They are VERY lightweight, the optics are kick butt, and there is even a little light called SpecLights you can clip on the magnifiers, so you can SEE even in a darkened room! I liked them so much that I decided to bring them into my arsenal of products that I sell.

I also purchased the Vario XL magnifying lamp at the same time, and I LOVE it! It has a flexible 22 inch gooseneck arm that STAYS PUT and doesn’t drift down to attack your client! (It also doesn’t squeak and creak when you’re moving it – it is SILENT!) The 6 diopter aspheric lens has a cera-tec (protective) coating. Why is the lens type important? Aspheric lenses don’t distort at the edges, whereas most of the other magnification loupes on the market do! (Quick – run and check yours out! Is there distortion at the edges? I bet there is!). The magnifying lamp also comes with a ring of 63 LED lights that have a 50,000 hour lifetime AND it comes with a 1 year warranty!

FYI – the magnification glasses also have aspheric lenses, which I’d guarantee the cheap-o’s on eBay and Amazon don’t have.

What is the moral of this story? Do yourself a favor and stop being cheap when it comes to your eyes! You should purchase a pair of magnifiers or a magnification loupe that will LAST and won’t end up damaging your eyesight. Eschenbach Optik products are made in Germany, come with a 1 year warranty and are VERY high quality. I love my Eschenbach products, and I know you will too!

Awesome. I have it.

Your couch. It is mine.

Im a cool paragraph that lives inside of an even cooler modal. Wins